Bollington-now more town than the village is home to about 7,100 people.  It lies in the Borough of Macclesfield, just outside that town and in close proximity with Kerridge.  It is in the Bollin valley, the site being part of the former Macclesfield Forest, a vast area once owned by the Norman Earls of Chester.  The forest became denuded over the centuries, not least by 'assarting by permit’ that is, the taking-in of areas of forest land for agricultural uses by permission of the Earls - no doubt by some kind of return agreement.

The village is a delight to explore, and Its two-fold character is still in evidence as 'upper' Bollington Cross and 'lower’ or the valley bottom area, the latter becoming vastly expanded during the Industrial Revolution.  Many houses and other buildings are of the local stone from the Kerridge hills.  This includes the civic buildings for Bollington has a mayor and council.  There are pleasant open areas and a number of access points to many places of natural and historical importance and much to interest the industrial archaeologist within and without the town. 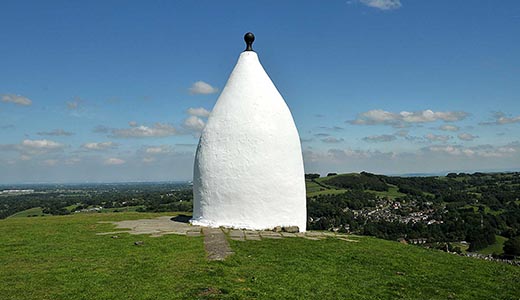 Initially, Bollington developed as a string of small-holdings or assarts during the Medieval period.  These lay then on the fringes of the vast parish of Prestbury.  It was not until the development of major industries that the village became a parish in its own right, with the consecration of St. John's church in 1834.  The village was then independent of the mother foundation at Prestbury.  Soon after this, the hamlets might be said to have finally become merged due to the extensive building which industrialisation brought with it.

The valley is watered by the Bollin and Dean rivers, the former rising in the foothills of the Pennines.  The Macclesfield Canal was engineered along the valley in 1831, as was the Macclesfield, Bollington & Marple Railway.  The site of this eleven mile railway is now a nature trail known as the Middlewood Way,

During the later eighteenth and the nineteenth centuries five major textile mills and a number of smaller ones became established for the weaving of cotton and silk.  The many Irish labourers who were brought into the area to work on the construction of the canal, which became a highway for the importation of raw silk and cotton to the mills, also became employed in both mills and stone quarries along with the local populace.  By 1851 the village population was just over 5,000.

Stone quarrying, which had taken place since early times in the Kerridge hills was, by the mid-nineteenth century, the second largest employer next to textile manufacture.  Coal was also extracted, and became the power source for the mills, thus replacing water power with that of steam.  A great feature of the mills was therefore, their tall chimneys, which were not only functional, but were status symbols of the mill owners who, after all, were in competition with each other. 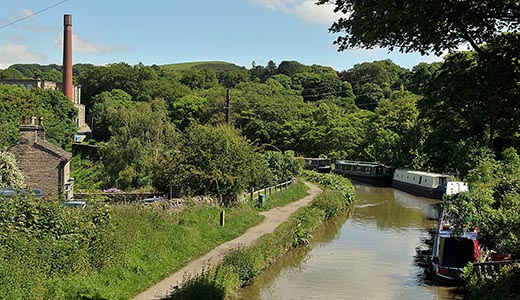 After the railway came in 1869, traffic on the canal lessened.  Today it provides a leisure facility for anglers, for boating and for canal-side walkers.  One of its most interesting features is near the Adelphi Mill, where the waters are cinducted across a road in an iron trunk, or aqueduct.

The oldest farmhouse in the area dates from the seventeenth century, but a number of large houses were built from about 1800 onwards by wealthy industrialists.  Most remain today, put to other uses.  One or two of the mill owners became village benefactors, providing housing, public buildings and a library.  But generally speaking, the hey-day of the textile trade was not a comfortable one for the workers, who tried to protest from time to time, and were still protesting in the 1930s about working conditions and hours.

The decline of the industry had in fact begun in the late Victorian period, when many people became unemployed.  The two war periods saw a renewed demand for cotton and silk, but despite turning to the making of synthetic fibres, production finally ceased during the 1970s.  Some mills became dilapidated and/or were demolished, and others have been put to various uses.  Coal extraction has also ceased, but the quarrying industry is still thriving.  Bollington was also known for its brewery-now also defunct.  There are still about twenty public houses however.  New industries have come in however, such as coated paper production and printing.

At Bollington Cross the church of St. Oswald was opened in 1908, near to the school built in 1845.  The church Infants School had opened as early as 1839. 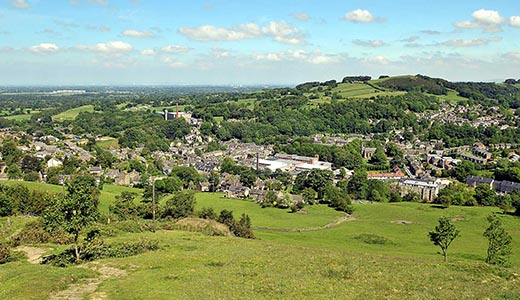 Bollington had a large Dissenting faction, including the Wesleyan Methodists, who built three churches on the same site, the present one dating from 1886.  The Roman Catholic church of St. Gregory (1845) was also rebuilt in 1957, but some distance from its original site and burial ground.

Known as White Nancy, Bollington's most famous land-mark stands above the village on the northern end of the Kerridge Ridge.  It is a small, conical building of stone, and was opened for public use as a gazebo, or look-out, for shelter and perhaps a picnic place early in the 19th century.  Sadly, vandalism has meant its closure.  Mystery surrounds its name, but White Nancy is held in much esteem by villagers and is feted annually.